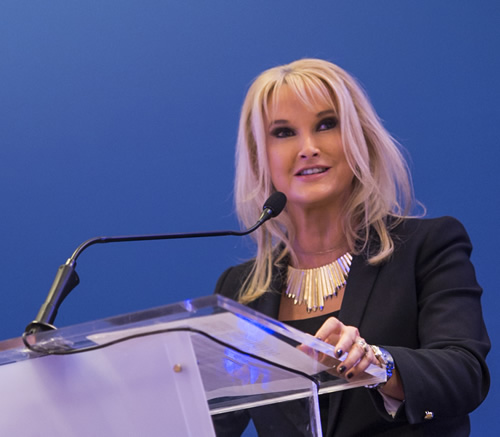 Bronwyn Nielsen is one of Africa’s most experienced, respected and well-known broadcasters. With over 25 years’ experience in African broadcasting, Bronwyn is regularly called upon by theWorld Economic Forum to host live panel debates at their events throughout the world.

During 2017 and 2018 alone she has chaired debates and panel discussions at numerous World Economic Forum events including: Switzerland (Davos), South Africa (Cape Town and Durban), UAE (Dubai), China (Dalian), India (New Delhi). She is also called upon by leading business organisations and institutes, such as Milken Institute, African Development Bank and ABN Group (which includes CNBC Africa and Forbes Africa) to moderate key sessions at their global events, which are often broadcast live.

Bronwyn’s media expertise and in-depth understanding of business and finance, combined with her ability to get the best out of industry and government leaders in the panel discussions, debates and one on one interviews she conducts, has resulted in CEOs, Chairmen, Presidents, Prime Ministers and Ministers from across the African continent asking her to provide media training, and to advise on media strategy. She is a highly successful trainer, bringing to the table not just her broadcast experience but also an understanding of the inner-workings of the corporate world having held senior positions with listed companies. During her time in-house, responsibilities included, developing and executing financial strategies and heading investor relations departments, achieving impressive share price, market cap and dividend increases.